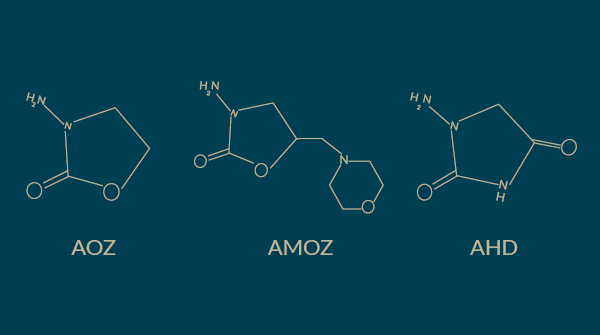 Antibiotic residues in food pose a serious threat to public and animal health. Nitrofurans are a class of broad spectrum antibiotics that are commonly used in food producing animals, mainly due to their antibacterial benefits in treating infections. Over the years, research has found that Nitrofurans have a number of serious harmful effects on human health.  These include carcinogenic, teratogenic and mutagenic effects when used in large doses or for a long period of time (Wang, 2017).

How do Regulations Vary Country to Country?

Due to the severity of the effects of AOZ on animal and human health, many countries have brought in regulations and monitoring processes for nitrofurans. The EU has banned the use of Nitrofurans in poultry, livestock and aquatic animals since 1995, and the Commission Decision 2003/181/EC limited the presence of the drug or metabolite in poultry, meat and aquatic animal products below 1.0ug/kg (Liu et al., 2013).

In the United States, the FDA listed nitrofurazone and furazolidone as prohibited drugs in the use of imported animal-sourced foods and banned the administration of the drugs to food producing animals in Federal Regulation 21CFR530.41.

In 2002, South Korea ruled that furazolidone should not be detected in pork (Li et al) and in 2002, the People’s Republic of China stated that nitrofurans should be banned as veterinary drugs.

There are two main methods of detection for nitrofurans, instrumental and immunoassay. Instrumental methods usually involve using a third party laboratory and can be time consuming, therefore this is usually only used when confirmatory testing is required.

Immunoassay testing is based on the specific binding between an antigen and antibody and does not require large scale instruments and expenditure and can offer users high sensitivity, low detection and setup costs and simple to follow procedures. One of the main methods of immunoassay detection is ELISA (enzyme-linked immunosorbent assay). This marker-based immunoassay technique uses the catalysis and signal amplification of the enzyme with the specific binding between an antigen and an antibody. Over the years, a variety of new immunoassay based technologies have been developed, however, ELISA is still the most widely used method on the market.

Biorex Food Diagnostics is a manufacturer of immunoassay ELISA tests based in Northern Ireland. We offer tests for the detection of antibiotics (including nitrofurans), growth promoters, mycotoxins, honey quality and pesticides. Nitrofuran kits include; AHD, AMOZ and AOZ, all three ELISA kits are highly accurate, have a 45 minute assay time and are validated for fish and shrimp samples.

Click here for more information on the AHD, AMOZ and AOZ kits.

Got a question? Email sales@biorexfooddiagnostics.com and a member of our sales team will be in touch.